The Citizens' Convention on Climate, what is it?

For the first time, a panel representative of the diversity of French citizens, will be directly involved in the preparation of the law.

The Citizen’s Convention on Climate, an unprecedented democratic experiment in France, aims to give citizens a voice to accelerate the fight against climate change. Its mandate is to define a series of measures that will allow to achieve a reduction of at least 40% in greenhouse gas emissions by 2030 (compared to 1990) in a spirit of social justice.

Decided on by the President of the Republic, the Convention brings together 150 people, all drawn by lot; it represents the diversity of French society.

These citizens will learn about, debate and prepare draft laws on all issues relating to ways to combat climate change. The plenary sessions will be streamed on this site.

The President of the Republic has committed to submitting these legislative and regulatory proposals “without a filter” either to a referendum, to a vote in Parliament or to direct implementation.

How to reduce greenhouse gas emissions by at least 40% by 2030, in a spirit of social justice?

Define measures that will be submitted directly either to a referendum, a vote in Parliament or implementation.

Selected at random, representative of the diversity of French society.

The Convention was proposed by the "Gilets citoyens" collective and the Economic, Social and Environmental Council (EESC) during the Great National Debate. The Convention can deal with issues relating to energy efficiency, thermal modernization of housing, agriculture, mobility, ecological taxation and any other mechanism it deems useful.

To organize its work, the Convention will be able to count on the support of a governance committee, technical and legal experts and professionals in citizen participation and deliberation. Three guarantors will oversee the neutrality and sincerity of the debates. The ESEC, a constitutionally independent institution, oversees the organization of the event.

The Convention takes place on 4, 5 and 6 October 2019 and will meet seven times at the ESEC. It will submit its conclusions at the 7th session. The Government will respond publicly to the proposals and publish a provisional timetable for the implementation of these proposals. Afterwards, citizens will be able to formulate a joint and public reaction to the Government's responses. 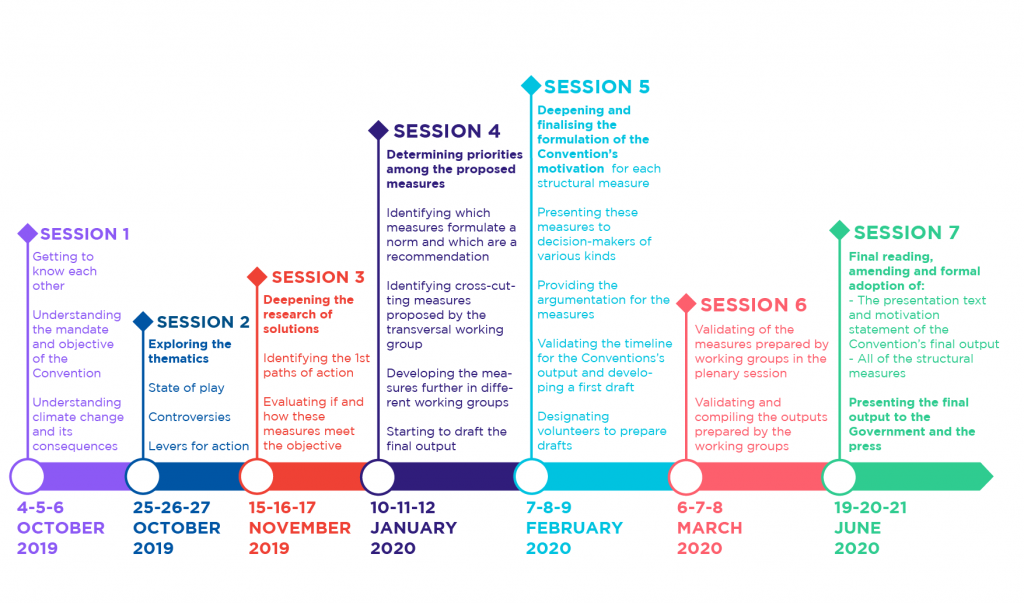