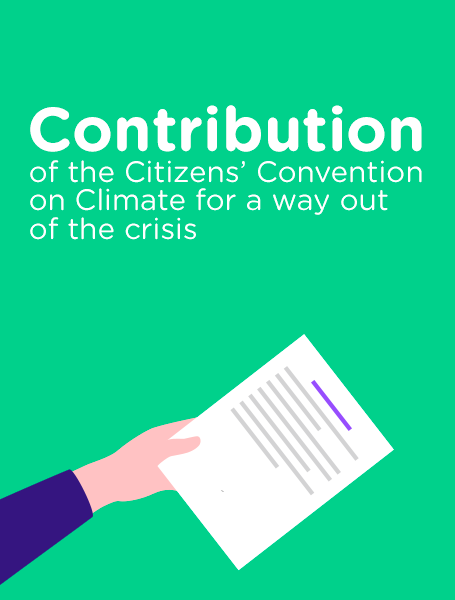 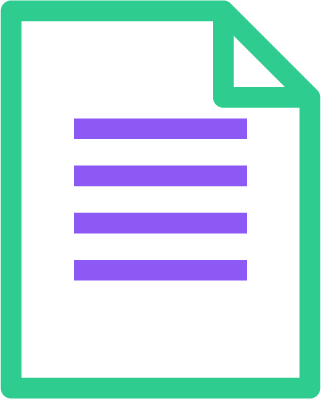 Contribution of the CCC for a way out of the crisis 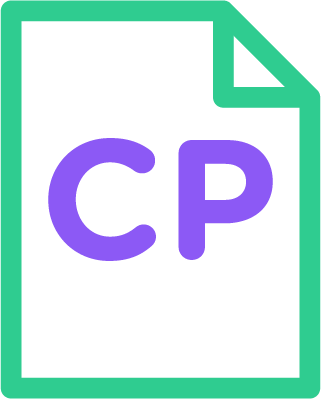 Russian version of the contribution →

Ukrainian version of the contribution →

We, citizens aged between 16 and 80, were randomly selected to be members of the Citizen’s Convention on Climate. Many of us have children and grandchildren; we are concerned for them and for the coming generations, and want to build a better future and leave them a habitable planet. Our work over the last six months has focused on the climate emergency and the most appropriate ways to respond to it without leaving anyone behind.

We are citizens who represent the diversity of the whole of society. We are independent of the Government and we have made sure that we are also independent of pressure groups of all kinds, while still hearing some of them in order to stay impartial. At times, we had opposite points of view, but we were able to listen to each other and build proposals together that we consider fair and equitable.

Why are we speaking out on this subject?

Now that the final handover of our work has been postponed by the health crisis, and with some of us even working on the front line of this crisis, we felt that it was important to speak out.

We are speaking out because the crisis we are going through appears not to be unrelated to climate change and environmental degradation.

The loss of biodiversity and the destruction of natural environments are signs of the ecological crisis, but have also been identified as important factors contributing to today’s health crisis. The multiplication of international trade and our globalised lifestyles are at the root of the rapid spread of this epidemic and also aggravate the climate crisis. All these factors will further increase health risks and social inequalities in the future.

The Covid-19 crisis raises questions about the effects of a future environmental crisis. With the measures that will be taken to get out of the current health emergency we should not accelerate climate disruption.

We are speaking out because it is urgent to act now to build tomorrow.

The events we are experiencing today are calling into question our modes of production, consumption, working, transportation, our housing and what we eat. Our lifestyles are being turned upside down and we are questioning our priorities, our needs and our daily behaviour.

We are speaking out because it is our duty as citizens of the Convention.

Even if the health crisis appeared suddenly and we were not prepared for it, we believe it is crucial to act, to make our contribution to ending the crisis. Although our work remains to be voted on and finalised, the Citizens’ Convention on Climate has already succeeded in structuring several proposals. In the face of the emergency, some of our measures would make it possible to contribute to economic recovery, reduce greenhouse gas emissions and, undeniably, improve our collective health and well-being, while taking into account the most vulnerable populations.

On the basis of these precise criteria, the Citizen Convention on Climate has chosen to share with the President of the Republic and the Government part of its work (approximately one third) in its current state, including possible amendments or reservations, before we have finalised the legislative transcription, either in full or in a short version depending on the choice of the members of the Convention.

As these proposals have not yet been formally voted on by the Convention, which still has to continue its work, we have decided not to share them with French society in their current version, pending a final and complete report that will be made public.

What are the messages we are sending to the leaders who are preparing the exit strategy for the crisis?

We hope that the exit from the crisis, which is being organised under the impetus of the public authorities, will not be achieved to the detriment of the climate, humans and biodiversity.

We ask that past mistakes are not repeated. It is absolutely necessary to avoid the pitfalls of the 2008 crisis, the recovery of which gave rise to investments in fossil fuels and industries that are harmful to the environment. The unprecedented situation we are experiencing today forces us to think about how we can link the economy and the environment.

In this sense, the short term should not take precedence over the long term: current decisions must be part of a sustainable and socially just approach that will benefit everyone and for a long time to come, without penalizing the most disadvantaged. We call on our decision-makers to show political responsibility and to make courageous choices for the future.

The strategy for emerging from the crisis must incorporate the hope of a new model for our society; it must make it possible to break with practices that are destructive to our environment, our society and humanity. We should strive to lay the foundations for a fairer and more sustainable society by putting in place the lifestyles we want for tomorrow.

This health crisis should not lead us into a climate crisis, the consequences of which would extremely serious as well.

We want the exit strategy from the crisis to prepare us for the future: for a different economic and societal model that is more humane and more resilient to future crises, health or otherwise.

The current situation, despite its catastrophic nature, highlights the need for a transition from our industrial system, which is emits a lot of greenhouse gases and destroys biodiversity, to a more virtuous and sustainable system. The confinement, as an experience of frugality taken to extremes, has shown that everyone can live more responsibly and that the French are very responsive when faced with an emergency situation.

The decisions that will be taken tomorrow must be part of a sustainable development logic. To this end, we recommend that major projects be launched to reduce France’s dependence on imports, promote employment in France and reduce greenhouse gas emissions.

While global trade has been growing for several years, the current crisis reminds us that it is necessary to relocate activities in strategic sectors to ensure our food, health and energy security. Following this logic, France must become an ecological model capable of creating a principled dynamic internationally.

We ask that the financing mobilized in the context of the crisis recovery be socially acceptable, that it be directed towards green solutions and that investments be concentrated in climate-friendly sectors of the future.

The recovery plans that are put in place at the end of crises mobilize important financing mechanisms to inject considerable funds into the economy. We must therefore ensure that this increase in investment is directed predominantly into the ecological transition and takes into account the situation of those who are the most fragile.

We are aware that this transformation of our model cannot take place only at the national level. International relations must be reconfigured in a spirit of social justice and must promote a climate-friendly regulation of globalization.

In the face of the crisis we are going through, it is necessary to reaffirm the importance of international solidarity for effective action. The risk of nations closing off and falling back within their borders is already visible as everyone tries to fight the Covid-19 epidemic. In this context, it is all the more necessary to federate around major European projects in order to spread a positive and unifying message. The fight against climate change is a major challenge that will require action and mutual assistance from all Member States.

Finally, this crisis concerns us all and will only be resolved through a joint effort, involving citizens in the preparation and decision-making process. Citizen participation is essential,  we see this every day with the many solidarity initiatives sprouting up all over France to allow us to continue to live almost normally. This is the ideal time to listen to and take into account the citizens’ remarks for the construction of a future society.

The Citizens’ Convention under the researcher’s microscope